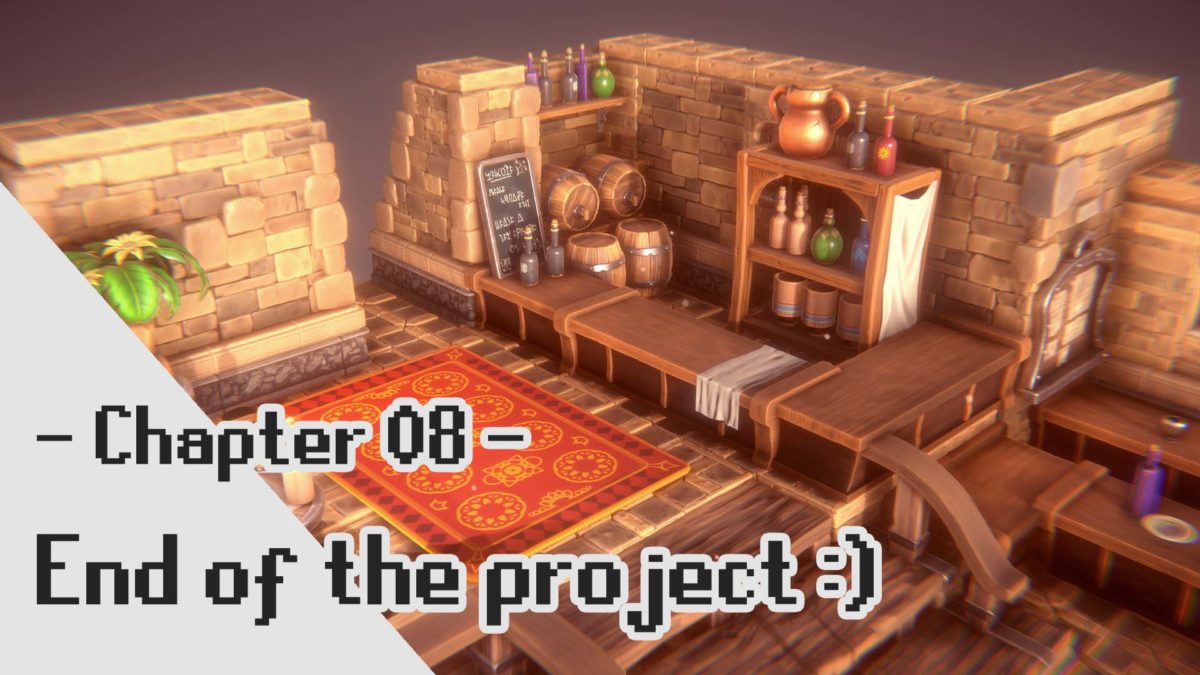 My little Final Fantasy Tactics Advance 2 3D Fanart project is done at last! So it’s the occasion to get around it one last time!

After many months of absence, I finally took the time to finish this! (The reasons for this hiatus will be explained later.) 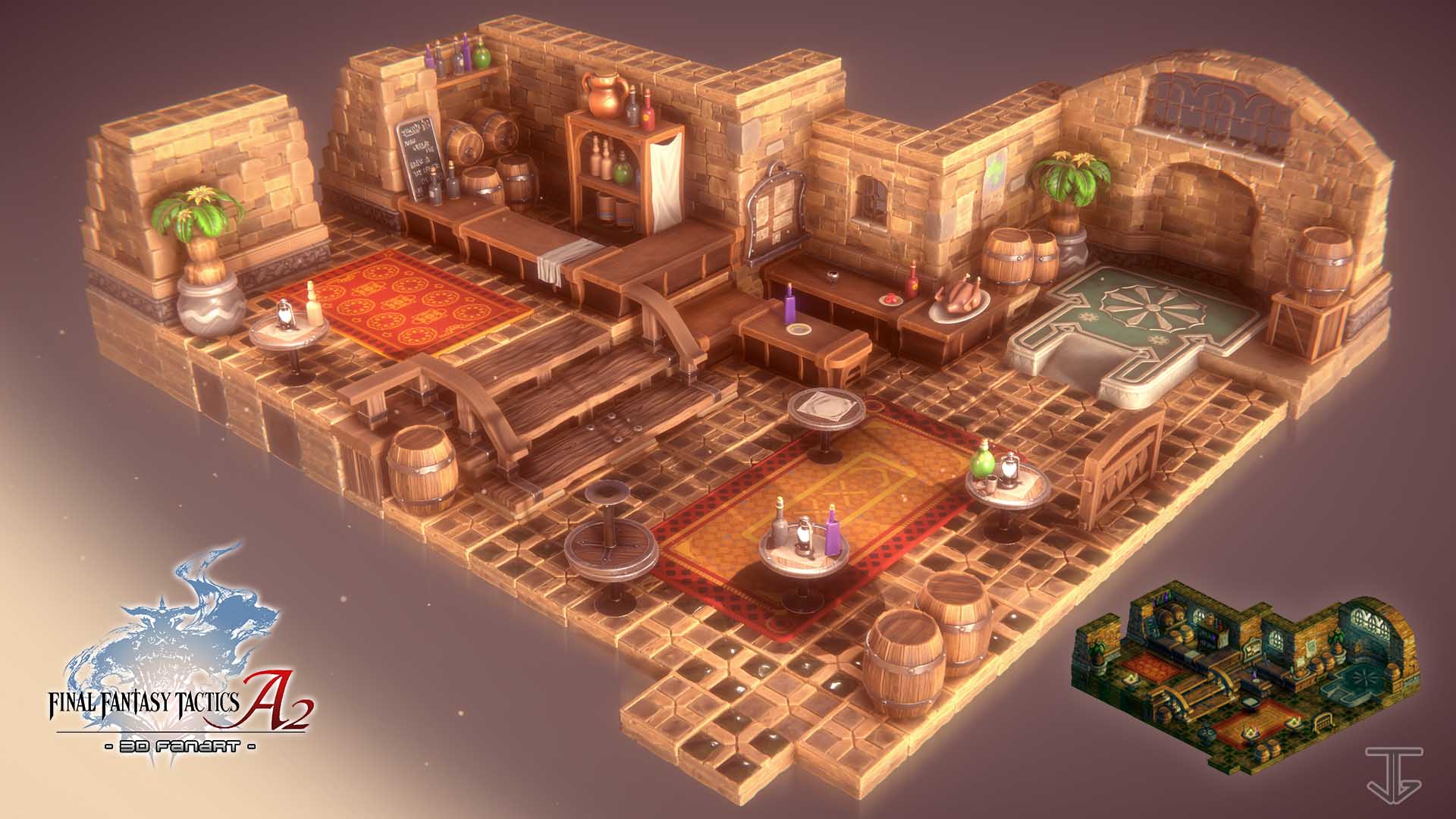 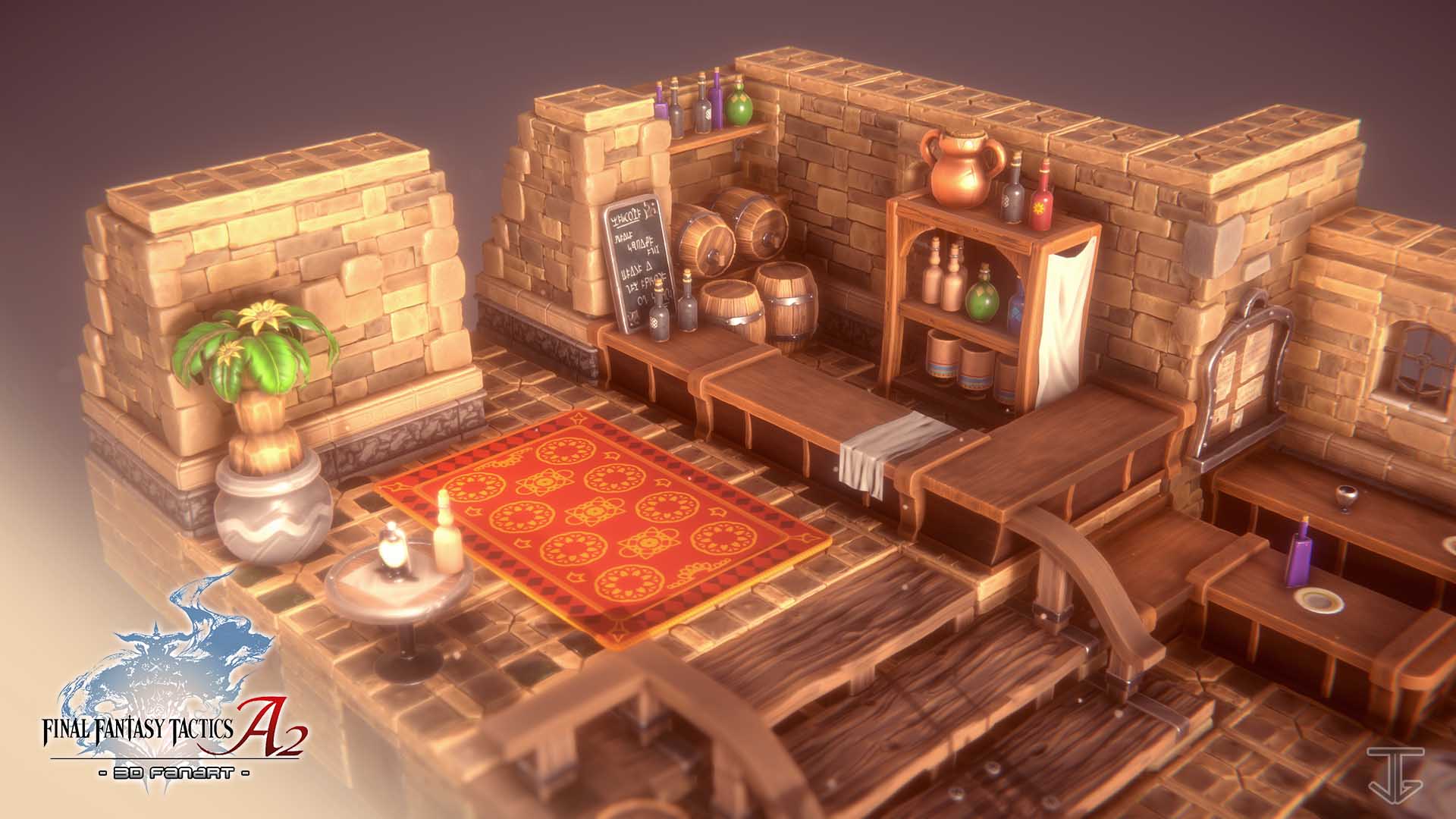 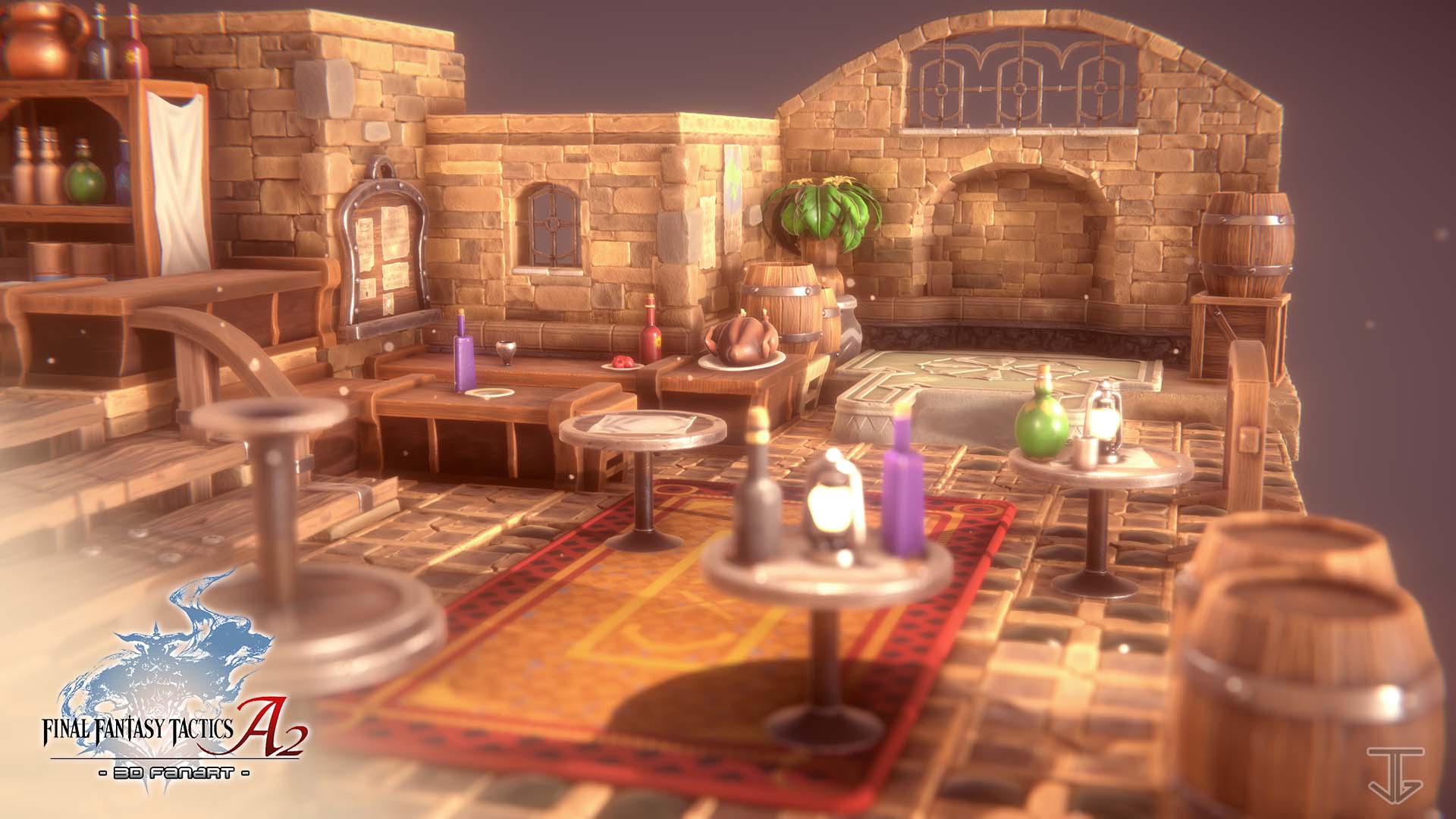 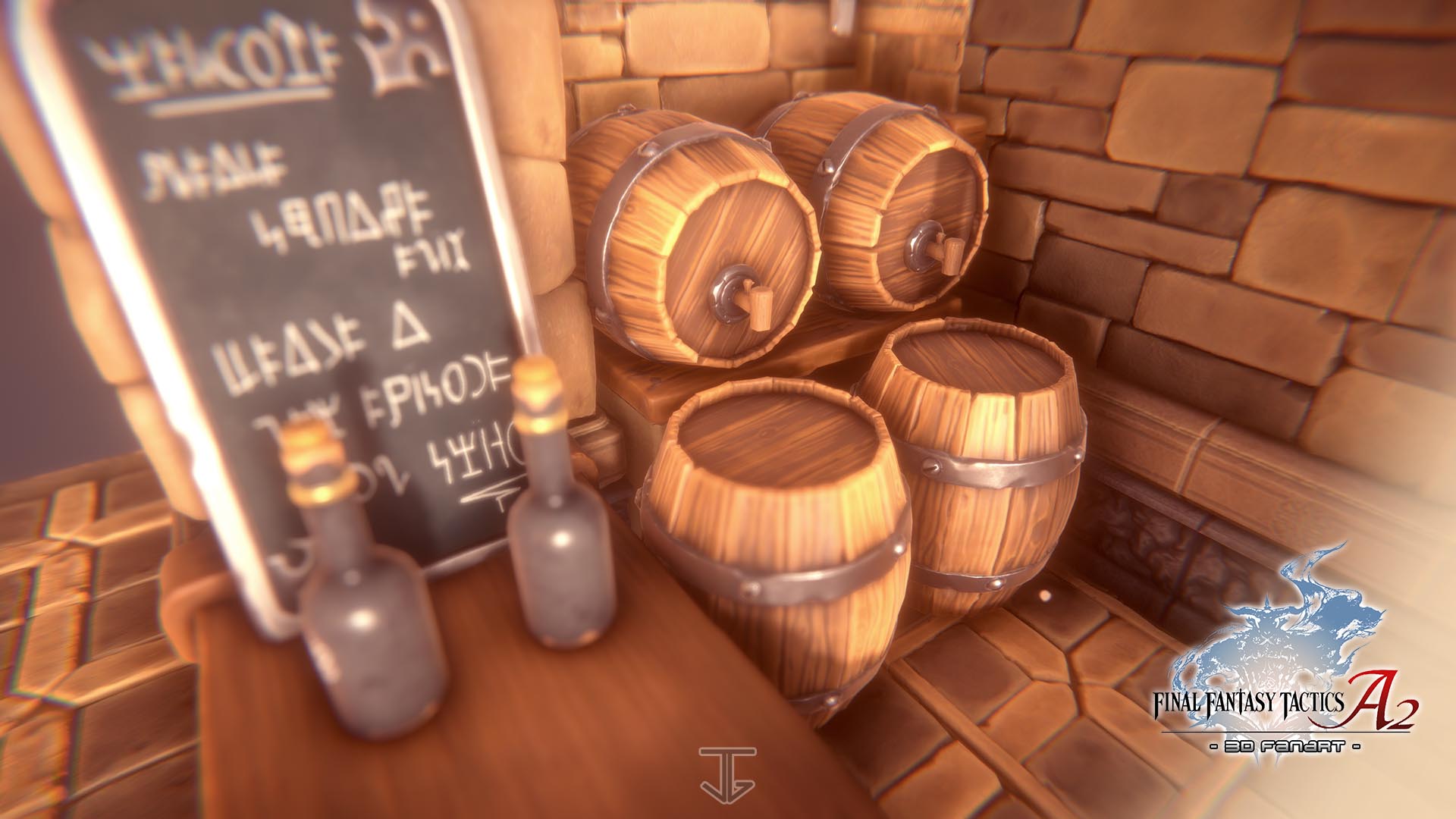 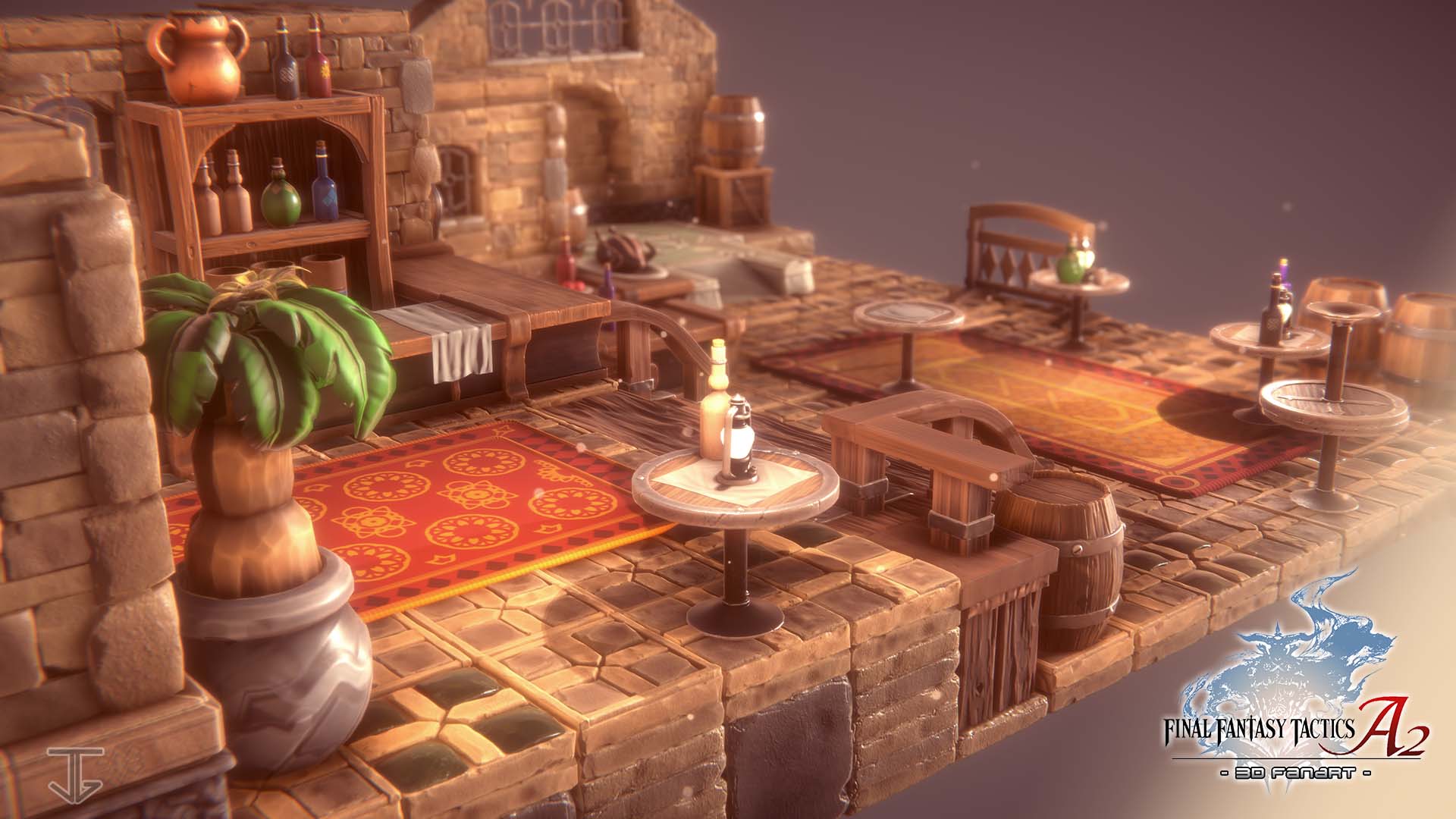 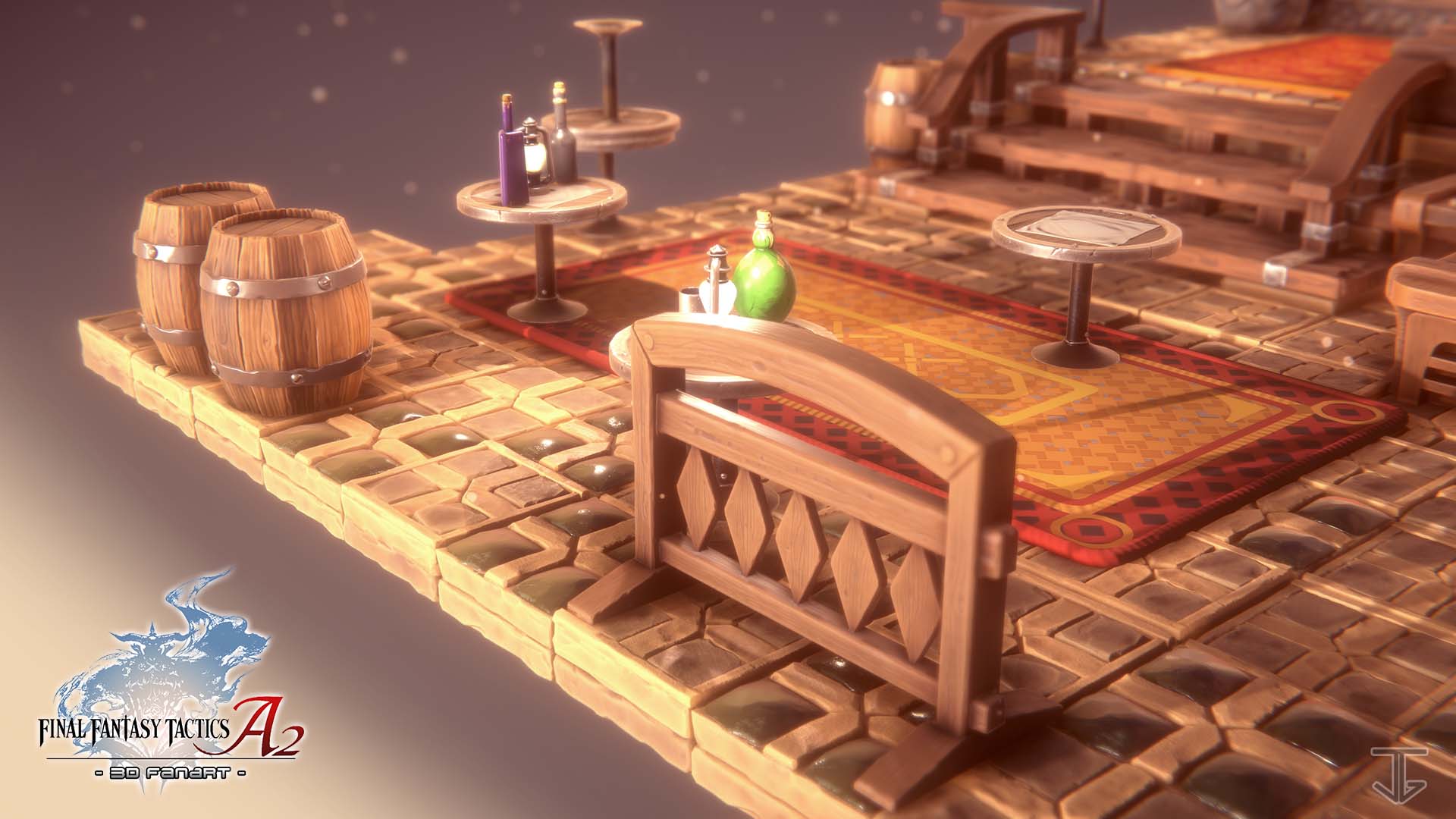 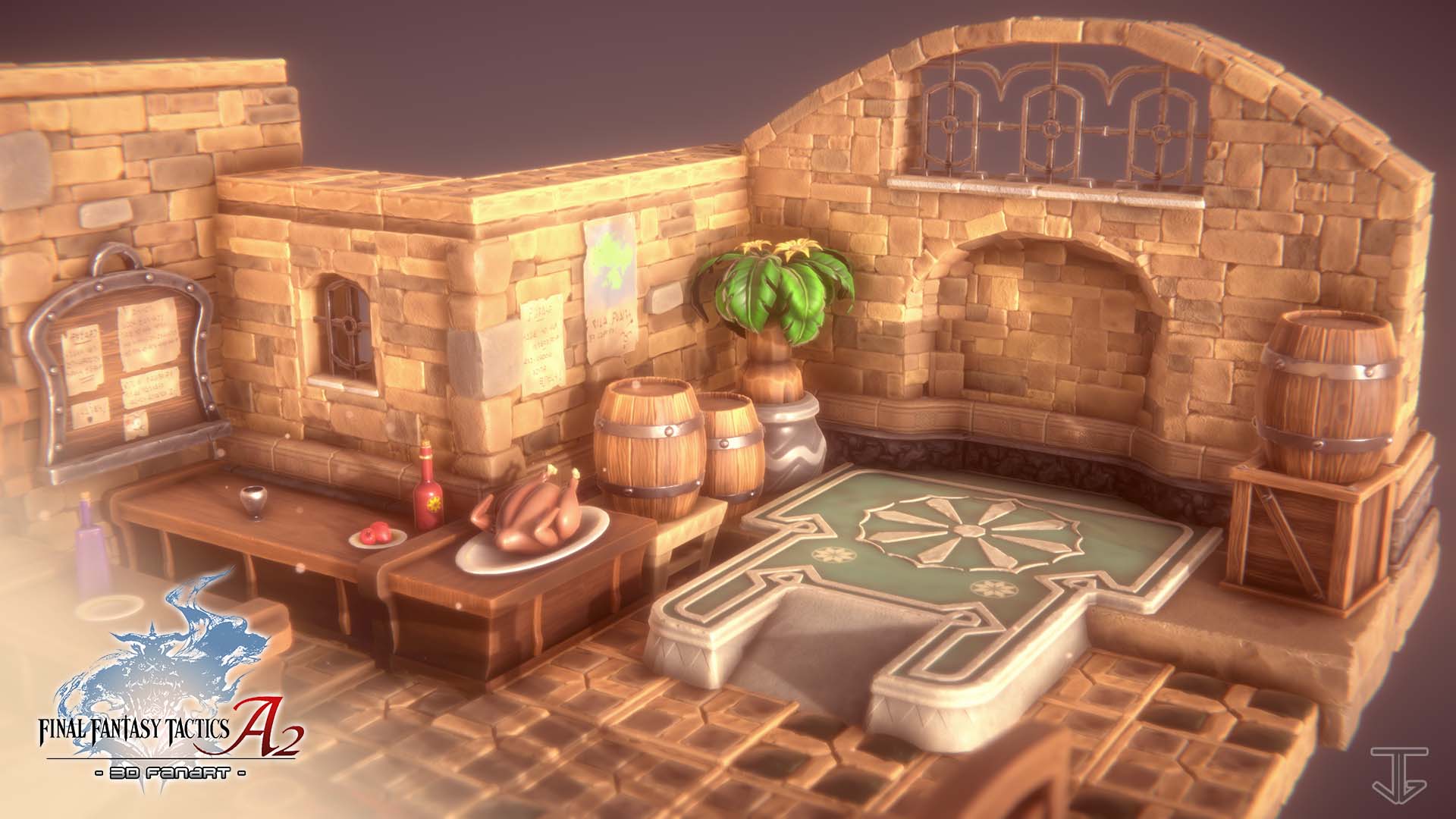 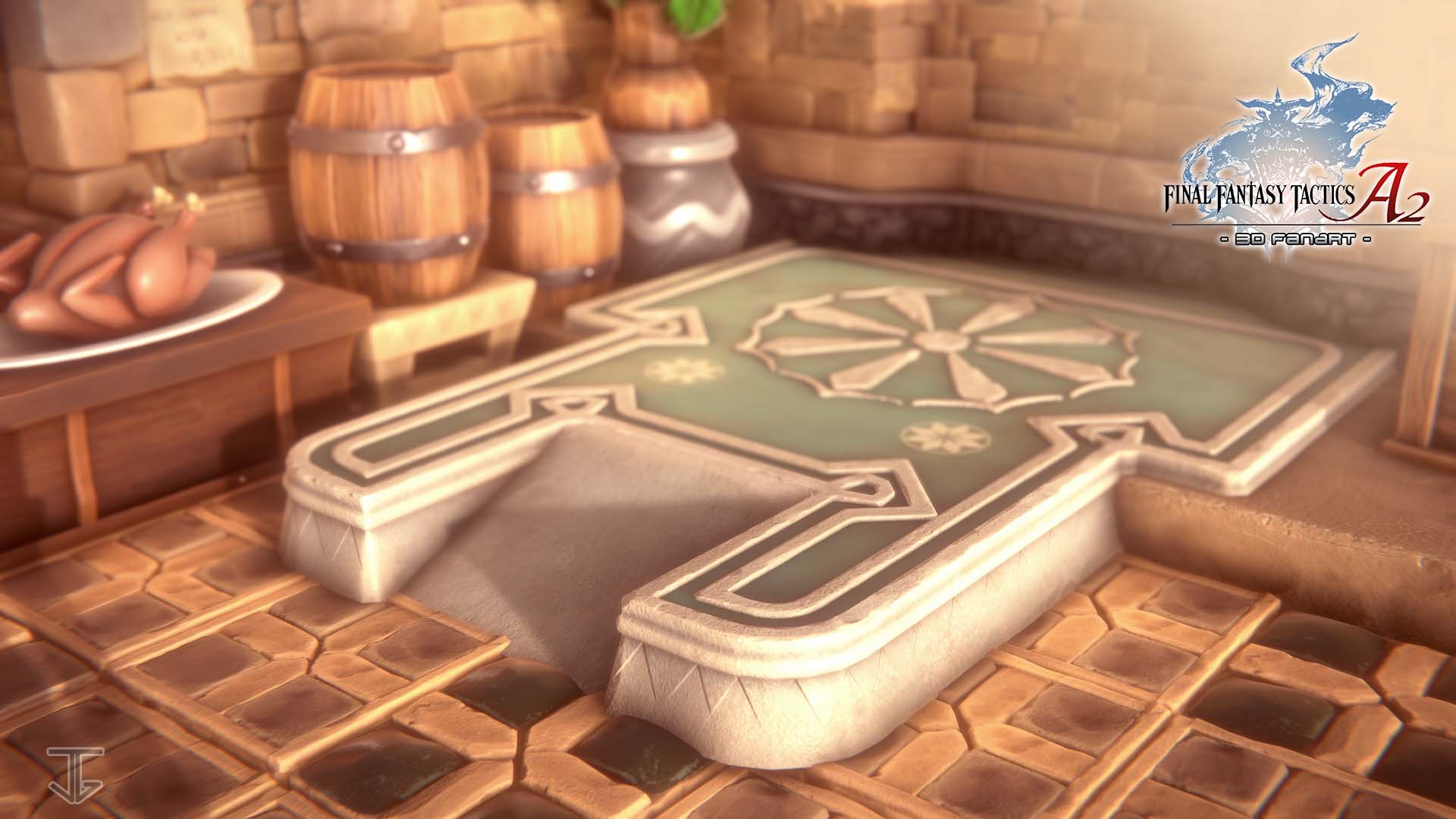 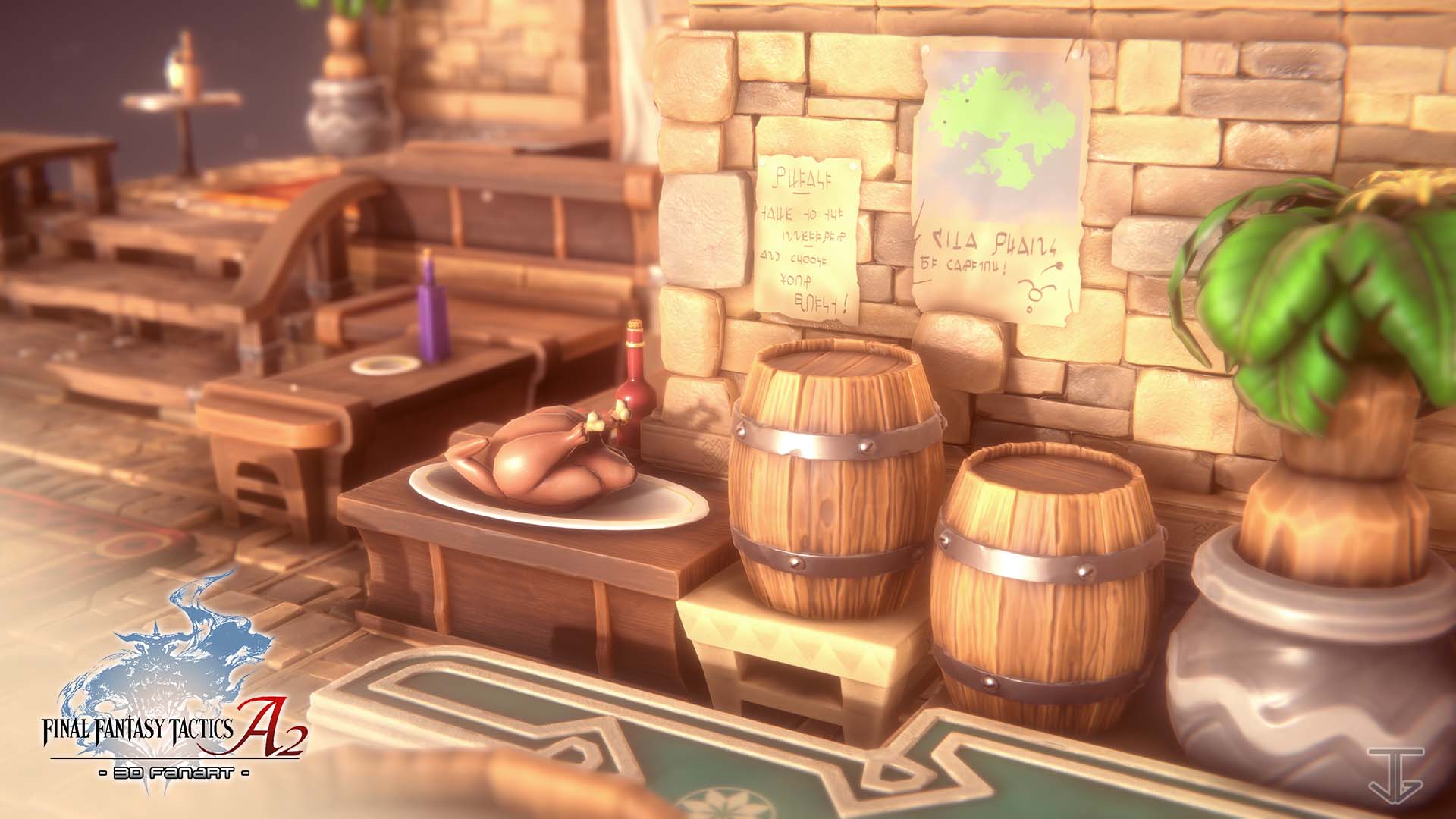 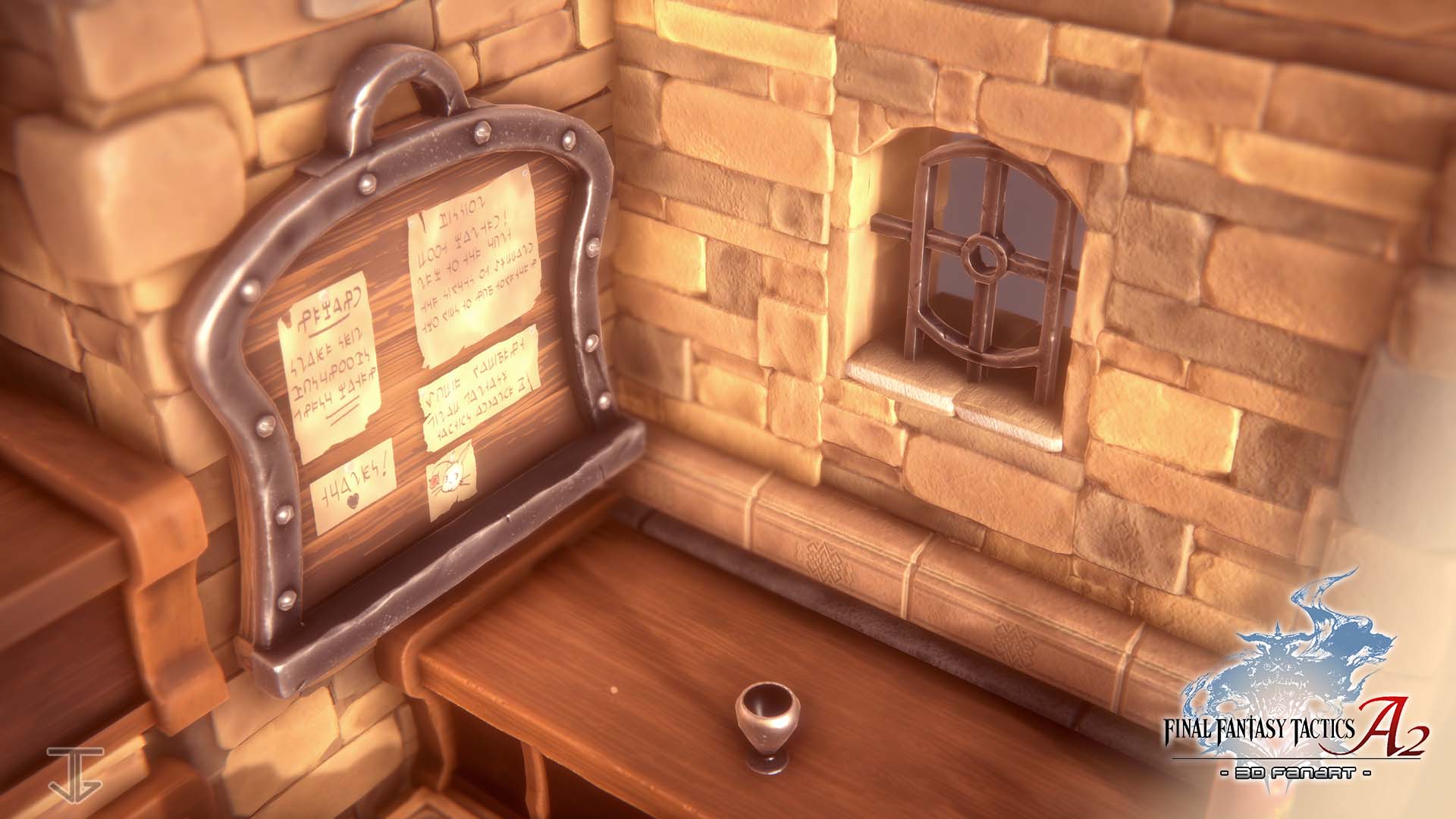 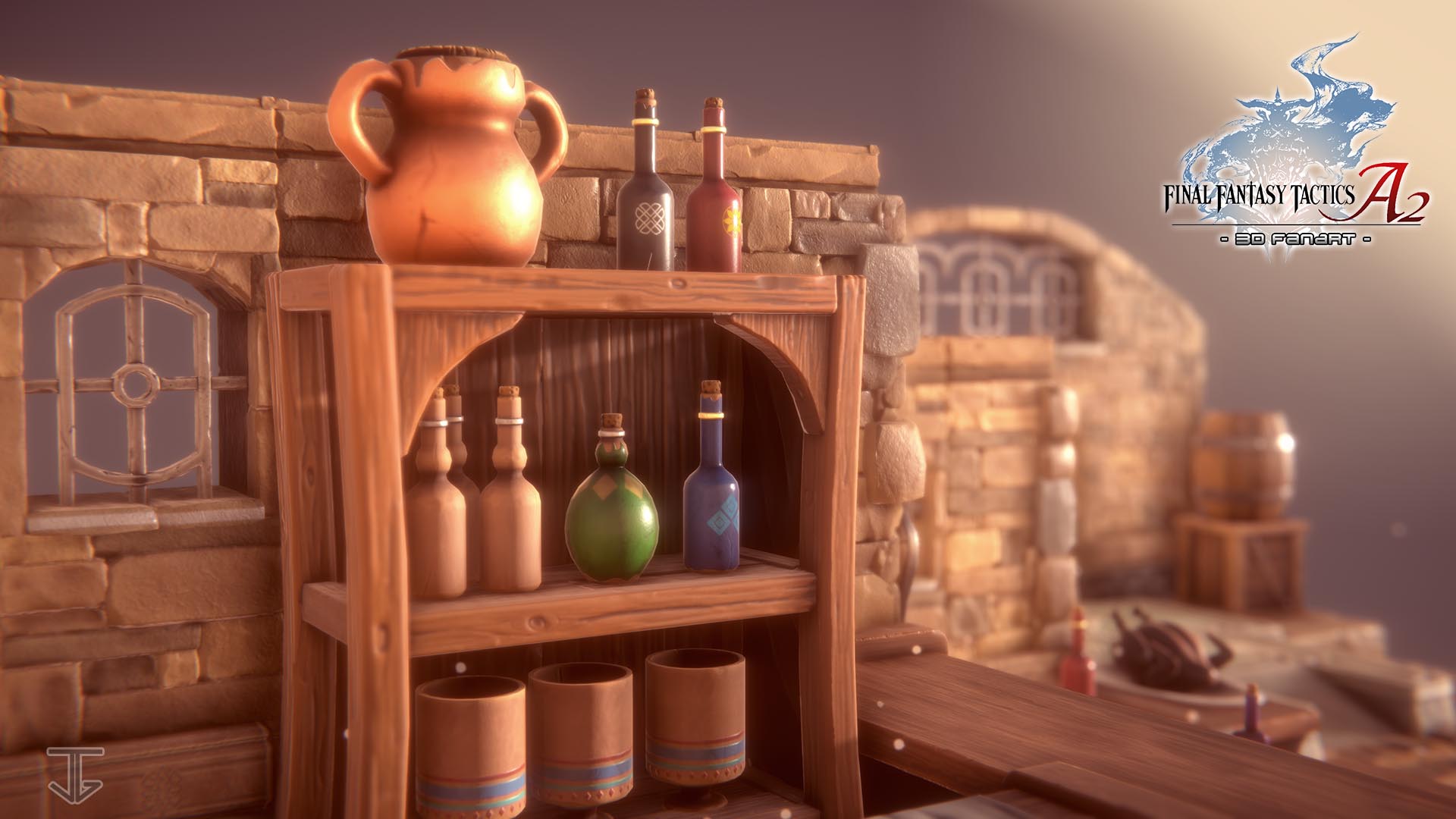 Previous article was about to crates, barrels and shrubberies … And during said hiatus, I just… finished the job. Before the break (which took place around early March 2019), I made the carpets, the platform, the tables, the big chicken, hunting board … etc

So when I got over it, I had only the smallest things to do: bottles, vases, oil lamps and towels.

Now, I am rather both satisfied with the feel of the scene and that this project has reached its conclusion:

“If FFTA 2 was release on Nintendo Switch, I would see envision it like this.”

It also allowed me to highlight technical and organizational issues I encountered.
On the technical part, I progressed a lot because even if I use the game engine “Unity” every day (with Edge of Eternity) I do not have a hands-on on everything! And working on a small scene allowed me to experiment a lot of differents things. Whether in term of optimization, or rendering.

And though this rendering is not as satisfying as I’ve liked it to be, it’s still pretty. And yet there’s something lacking. The lighting of the scene is not quite good, but I intend to continue improving on that, and refine my skills a little further with other smaller experimental projects.
I really want to make a very nice “modern cartoon” one day. 🙂

Another aspect that did not help me is the primary desire to stick to the basic reference in pixel art. By sticking too closely to the original concept, I limited myself to a certain type of render – I would’ve liked the possibility of a catchier lightning and rendering.
In any case, I am aware of the many improvements I need to undertake, and it is a good thing, since it is also my goal by making personal projects!

So now that the first objective is reached, I’ll maybe do two characters to give life to this scene (The hero of the game and the bartender). But it’s not my field of ​​expertise at all … it would be a bonus.

So, why this “break” of few months?

First, the method I’ve choosed to do this! To put the same energy on an important object or a less visible object was my first mistake!
It comes from the fact that on Edge of Eternity, there is clearly no time for finer details. And we use ingenuity to gain the maximum time in production, but it feels a bit about quality. On my personal project I wanted to take the opposite and make no concessions about the quality … But in the end I quickly lost energy and time on very minor things. And that can sometimes be quite discouraging 😀

The scene in itself looks seem simple but is in fact far more detailed than I thought, and as a result it took me too much work for the final rendering!

Also, it’s important to accept the fact that we can’t be productive all the time. Creation is not something forced and even less linear. I work on envy, without any form of constraint.
And the last thing is that inevitably there are better times to work at home in your free time, and these last months were not really so.

Ok a little positive now! xD I’m still VERY happy to have worked on this scene. Also because the license Final Fantasy Tactics Advance reminds me of great memories as a gamer (thanks to my little brother “Inaki” who offered me the 1st game on GBA for my 14 years at the time, while I was sick under blankets in the sofa), I felt a tribute as due
So, here’s hoping that Square Enix will make a nice new episode on Switch!

I sincerely hope you enjoyed this little project! I’ve made this mainly for myself, but without feedback or supports it might become a wasted effort sometimes, so I have to thank you for being there!
I don’t know what I’m going on exactly for my next small personal project (or do I?). But I’ll post the next week my work of these last months on Edge of Eternity 🙂

Edge of Eternity: Welcome to TyrCaelum!

FFTA2 3D Fanart: How to create the baseboard !